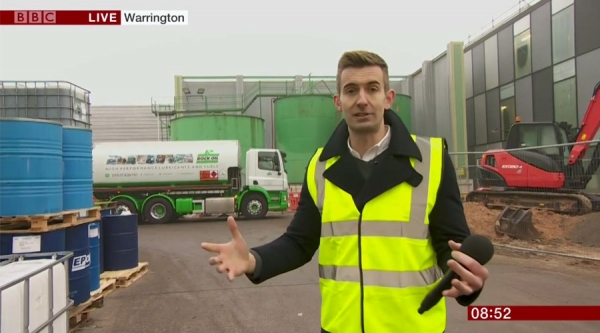 Rock Oil received some very welcome guests in the form of BBC reporters early yesterday morning at our Warrington HQ. As Prime Minister Theresa May launched her industrial strategy for post-Brexit Britain with a vow that the Government will 'step up' and take an active role in backing business, our Warrington HQ was featured in a series of reports for the BBC over the course of the morning. BBC news reporter, Ben Thompson, gave an impromptu tour around our operation along with 4 live interviews with our Managing Director Greg Hewitt, asking his thoughts on how SME's could benefit from the Government's backing.

"We were delighted to welcome the BBC onto site to show them and their viewers that manufacturing in the UK is flourishing and that brand GB is something to be proud of. It’s testament to the continued investment in the business and the hard work of the 80 strong workforce that Rock Oil manages to produce world class lubricants which sell across the globe in many cases against much cheaper competition."

Managing Director Greg Hewitt with positive comments on the experience.